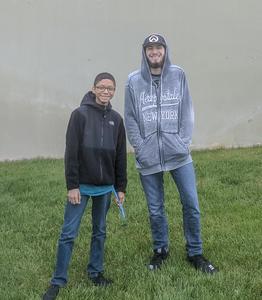 Rogelio Lemus and Ethan Orozco, both Hermiston High School juniors studying computer science, were notified by Congressman Greg Walden’s office that they are the winners of the 2018 Congressional App Challenge for Oregon’s District 2.

Lemus and Orozco created an app, which they named B.A.N.A.N.A (Basic App to Notify Authorities of Non-Authorized Abduction). The app uses facial recognition technology to help find missing people. The app allows individuals to upload a photo of a missing person for comparison against a national database, to help find loved ones. To see the students’ application visit YouTube and type https://bit.ly/2JDoLPa on the search bar.

“Rogelio and Ethan wanted to create an app to help people, not just create a game to entertain,” said Robert Theriault, their HHS computer science teacher. “I was very impressed when I learned they had chosen a project that could be used as a tool in helping people find friends who have been missing. This project showcases Rogelio and Ethan’s technical abilities and also demonstrates their compassion for the community.”

Both students are invited to attend the House of Code in Washington, D.C. in the spring.

Courtney Cash, Marvin Hozi and Jordan Liebe won the Congressional App Challenge in 2016 for developing a “Touch and Talk” Chrome App. The application allowed students to “say” common phrases used at school by simply clicking/touching a button. The application could be used with the Makey Makey’s that special programs educators purchased through grants received from the Hermiston Education Foundation.

The Congressional App Challenge mission is to inspire, include and innovate efforts around STEM, coding, and computer science education. It is the most prestigious prize for a computer science student.